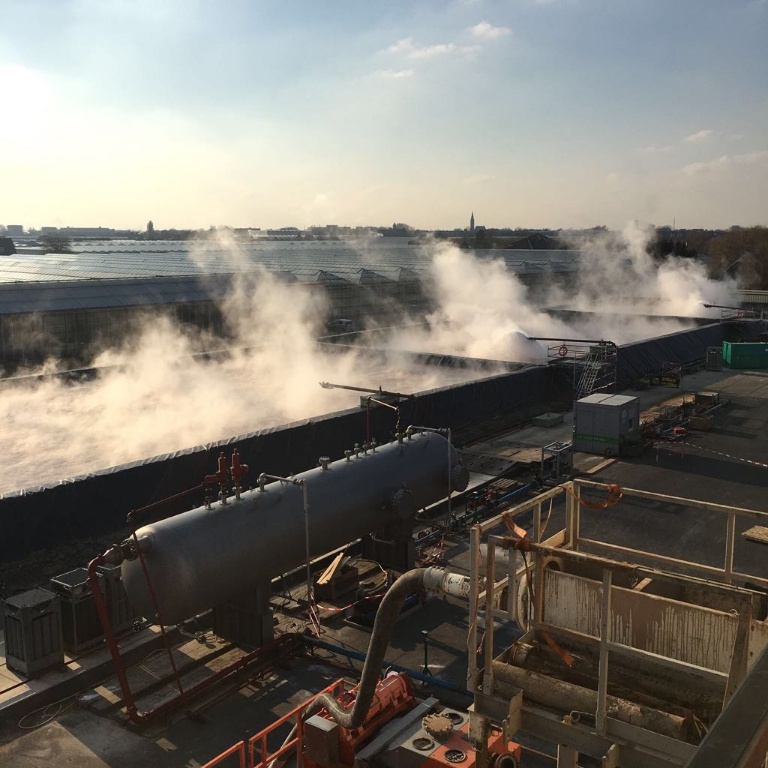 February 28 Trias Westland performed the production test in the Lower Cretaceous Reservoir. Water from a depth of 2.3 kilometers was pumped up. The test went very well. The hot water flowed very smoothly into the basin and the gas in the water was flared off. Samples have been taken and measurements have been made  to determin , among other things, the pressure and temperature. With this information the project team can start with the realization of the heat network. The exact potential of the geothermal doublet will be known at the end of April, when the second well has been drilled and tested.

Lower Cretaceous project
Mid-February the decision was made: Trias Westland will realize a geothermal project at a depth of 2.3 kilometers. This is the Lower Cretaceous layer, from which also the other Westland geothermal projects extract their heat. The Triassic layer, at a depth of 4 kilometers, turned out not to be suitable for cost-effective heat recovery at this location. The layer above - the Lower Cretaceous layer, or more specifically the Delft Sandstone layer- turned out to be very suitable for the production of hot water.

Triassic layer
The permeability of the Triassic layer is by far not sufficient to pump water upwards. According to project manager Floris Veeger water flow is almost impossible in this rock. In addition, traces of gas have been found, which make a production test very complex. These factors led to the decision to leave the Triassic layer. The lower part of the pit has been closed off with concrete plugs. In the third section the casing perforations have been made through which the water can flow.

Research second well
Although Trias Westland would haved  to realized a Triassic project, the greenhouse horticulture companies and shareholders are positive about the possibilities offerd by the Lower Creatceous layer  for the utilization of sustainable heat. Director Marco van Soerland: Previous measurements had already shown that this layer is very permeable and the production test went very well. We estimate that we can connect about thirty companies to this geothermal doublet. In addition, Trias Westland will investigate the possibilities for a second geothermal source. Which companies will be the first to be connected, will be determined by the location of the companies and the number of customers in the neighborhood.

T&A Survey has been involved in the Trias Westland project from the outset and now provides the drilling management. Read more about the project.