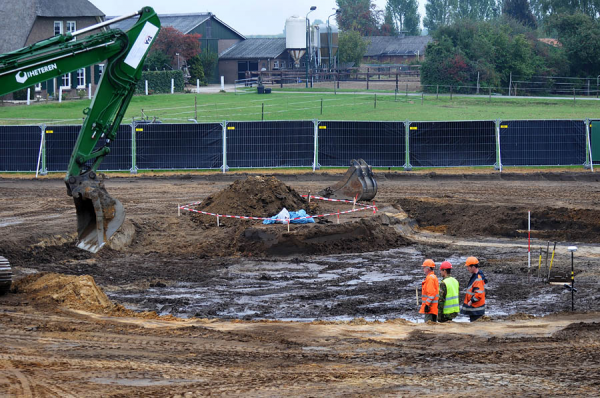 Thorough preparation is a prerequisite for a smooth and structured and cost-effective arcraft salvaging operation. The Role of T & A Survey consists of:

After approval by all relevant authorities, the plan of action will be implemented and the actual salvaging operation can start. T&A Survey performs a layer-by-layer detection and approach with support of civil engineering equipment. There might also be an archaeological investigation. The salvaging operations are carried out accoding to strict rules and legislation due to the the possible presence of UXO.

A British Avro Lancaster III bomber crashed near Zelhem, The Netherlands, on 23 September 1944. The plane wreck and the killed crew members were never officially recovered. The municipality had several goals in mind for the salvaging operation: to perform a soil remediation and clean up any UXO, but also to create a more concrete picture of the event for the family members of the crew and their commemoration. T&A has carried out the salvaging operation under UXO legislation conditions and also provided archaeological supervision.

Salvaging of a Short Stirling in Echt-Susteren

This was the first aircraft in a series of promising salvaging operations with missing pilots. The Short Stirling W7630 MG-M is a RAF aircraft which crashed in 1942. For the salvaging of the Short Stirling, T&A Survey has mapped and visualized the horizontal and vertical delimitation of the crashed aircraft, as well as the environmental and soil conditions.