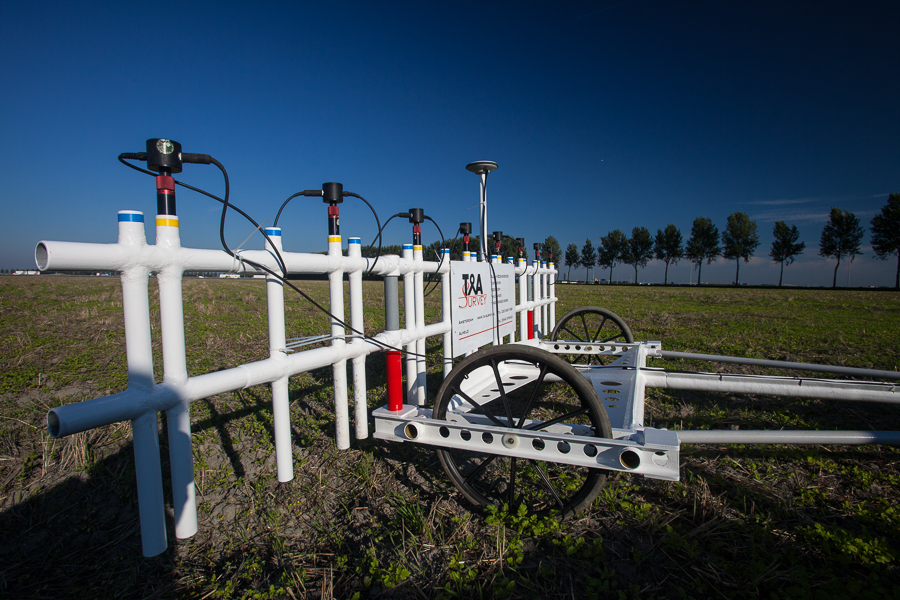 There are various techniques for mapping the subsurface or constructions. Based on our knowledge and practical experience we determine which technique will be most succesful for each investigation. Important factors to take into consideration are for example depth, specific circumstances, precision, measurement speed and costs.

The measurements are taken by moving the equipment on foot or with a a quad or boat, over the research area. Sometimes the research equipment has to be brought closer to the research goal, for example by using a borehole. All geophysical techniques used are non-destructive, making the location immediately accessible afterwards. Sometimes locations are partially cordoned off.

The geophysical techniques used for UXO detection respond to changes in the soil caused by the presence of metallic objects. All our detection techniques have been tested worldwide and found suitable for the detection of explosives.

The results are usually not immediately available on site. The data is analyzed in the office and then reported. Depending on the purpose of the research, this is done in an overview map, a cross section or a contour map of the subsurface.
(UXO) Detection techniques commonly used by T&A are: 3D-Radar makes is possible to quickly and efficiently create a 3D image of the subsurface. T&A Survey officially represents the 3D Radar in the Netherlands, Belgium and Luxembourg.

Principles of measurement
Ground penetrating radar uses electromagnetic waves transmitted into the subsurface by an antenna. When the characteristics of a material change, these waves are being reflected in the ground or in a construction. The reflected waves are registered by a receiving antenna. Both metal and plastic objects reflect the waves, making the detection of both kinds of material possible.

Execution of measurements
In many occasions the equipment is attached to a vehicle, but it can also be moved by hand. The technology is most suitable for surveys of a large areas without obstacles on the surface, for example the detection of objects under a railway, mapping the ballast bed on a railway or mapping the thickness of asphalt or the base and sub-base of tramways, roads and dikes.

Advantages of the 3D Radar
The result is a detailed 3D image of the subsurface.