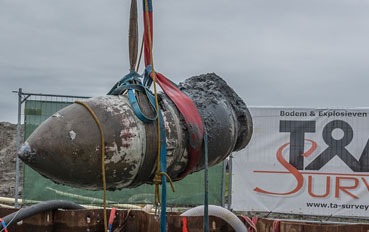 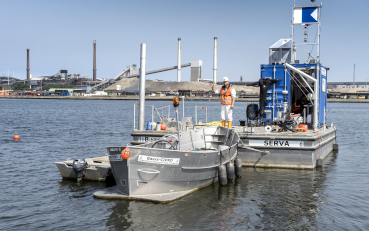 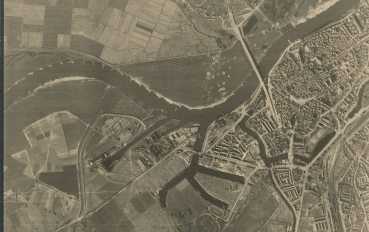 On June 18 and 19, the EODD detonated several bombs, two of which very large, on the beach at Bloemendaal. That resulted in an amazing spectacle with flying sand and lots of fire. The two largest were German aircraft bombs of 1,000 and 1,200 kilos, originating from a field near Rijsenhout. T&A Survey and van Heteren approached and identified the bombs on behalf of SGN and the municipality of Haarlemmermeer.
Diving in a cofferdam
It was quite a job to successfully identify the igniters without moving the bombs, which were located at approximately 8 meters minus ground level. For this purpose, T&A/van Heteren have placed a circular cofferdam around the objects. The cofferdam was mechanically excavated. The pit was then pumped full of water and a specialized UXO diving team sucked the soil away above the bomb.
Identification
The identification of the bombs and their igniters was done based on accurate dimensions and high-resolution video images. The divers were followed in real time above the water. In addition, T&A made use of techniques that had not been used for these purposes before, such as an underwater 3D laser scanner and X-ray equipment. The last two German bombs have been identified with an identifier specially developed for this project by T&A Survey and Baars-CIPRO.
The igniters of the bombs appeared to be equipped with a Zünderzwischenstück, an adapter that was placed on the igniter of large aircraft bombs to make it fit better under the aircraft. This means that the identification numbers on the igniter were not visible. T&A survey and Baars-CIPRO together with the EODD have developed a device to remove this adapeter from the igniter under water, in order to enable identification. The identification showed that the igniter was no longer working. The explosives therefore did not constitute a safety risk.
Preparing for detonation
Since January the bombs were temporarily secured in Rijsenhout. They could not be detonated there because the size of the bombs was so large that the bottom of the Haarlemmermeer would not have been able to handle it. That is why the beach in Bloemendaal was chosen. Before the detonation could take place, UXO survey of the surroundings was necessary. This dune area was part of the Atlantic Wall. During the investigation some anti-invasion objects such as Rommel asparagus and tetrahedras were found that were placed on the beach during WWII. After the clearing of the location, two dates for detonation were set together with the Explosives Clearance Service (EODD) and the municipality of Bloemendaal.
Meticulous
The operation required a lot of preparation and everything had to be meticulously coordinated. Early in the morning the bombs were transported to Bloemendaal in EODD trucks and with police escort. After the EODD applied the explosive charges, the bombs were covered with 10 meters of sand. Air traffic above the coast was stopped and the surrounding water, beach and dunes were cleared. For example, boats, swimmers, hikers and other interested people were kept at a distance by the police, forestry, Rijkswaterstaat and the rescue brigade. Just before the explosion, a police helicopter scanned the area with infrared equipment to ensure that the area was cleared.
Extraordinary
The bomb that was detonated on 19 June was a 1,200 kg German aircraft bomb of the SC1200 type, which contained 631 kilos of explosives. As far as is known, a bomb of this size has never before been found in the Netherlands. 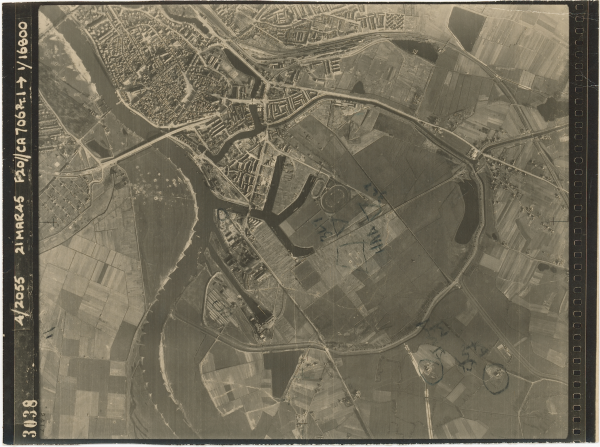 T&A has an archive with a large amount of historical data on virtually all Dutch municipalities. We would also like to use our knowledge for the benefit of your municipality!